Symptoms to look out for 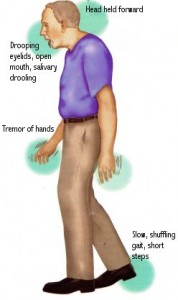 If you are suspicious and think that someone you know are ill, then there are a few symptoms which you can be on the lookout for. It’s difficult to gain an early diagnosis, as typically the disease becomes more pronounced in the later years when physical symptoms are starting to show. We would like to give you some information on what to look out for, as if left without the proper care and attention there can be negative effects for the victim.

The first symptom, which you may already know if is the stereotypical shakes, this is something that the vast majority of patients experience, and the cause of it is to do with the detrition and damage occurring to the nervous system. The shakes can be annoying and at times they are intense enough to disrupt the patients ability to live, however it is usually not the greatest cause of danger. Which brings us to the second symptom to look out for. A loss of motor function and balance is something common, and much more related to direct danger for a patient, as the risk of falls become greater. This can usually be battled by ensuring that the home is rearranged to be well suited for the condition of the patient. Putting support rails and removing extraneous furniture and sharp edges at home are all part of standardised things commonly adapted.

The last and common symptom that we would like to bring to you, is that the hand writing of the patient is often also affected, it tends to become smaller and depending on how far the disease is progressed you can often also identify shakiness in it as well. So if you are unsure, this is a good way of checking. Finally, if you are in the situation where any of the above symptoms are recognised in your loved one, ensure that you get in touch with a doctor to get this checked.
Although there is usually no need for emergency care, the sooner it is discovered the better the outlook is for the patient.